You can find our former blog HERE

And HERE’S a link to the worm website where there’s a quite accurate list (with short interviews) of studio residencies, intertwined with other Worm projects.

Adi Gelbart in the studio…  Adi gave us later a copy of his record ‘Preemptive Musical Offerings To Satisfy Our Future Masters‘ which was partly recorded at these sessions. In 2017 some of the studio equipment was sold to Toonzaal Willem II in Tilburg, as it was still owned by the former CEM. We started to built up a new collection with a slightly different collection. Stuff like this; 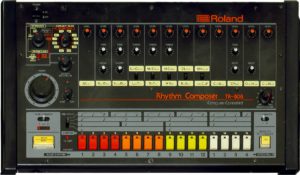 etcetera!
The Worm publicity machine tried to interview us about that (and the re-opening in 2018). This is the result;

Opening of the Worm studio, what do you want to achieve with it?

“What do you want to achieve with that …?” What does that mean?

The Worm studio has been open since 2005, right? How many musicians and sound artists have not worked since then?

What is your point?

At the beginning of last year, almost the entire ‘old’ worm studio moved to Den Bosch … And we started building the old studio with new content … That went pretty well … We now have two studios available with special old junk ….

You talk about your own stuff like that? It seems that there is a whole arsenal of vintage synths, effects and rhythm machines in one studio, and the small studio has been converted into a pre-synth modular lab …

Is this a question or a publicity talk? Of course I mean by old junk something like ‘unheard of rare electronic vintage equipment’ ….

And why exactly should musicians, producers and sound artists use the Worm studio?

Why ? Let them stay away. It’s way too much fun to work in the studio for us. It’s a kind of playground, suitable for all kinds of artistic processes … from collecting sounds to composing all kinds of music to making radio pieces and everything in between and beyond … Oh now I was too enthusiastic … Stay at home folks, with your Ableton samples you can basically do everything you want…

This is not a question, but I’ll just say it anyway; the two Worm studios are available to everyone who is professional enough to handle the equipment. We ask a small amount for studio use, a little more for commercial and supported projects. It is also possible to take out a subscription, on the one hand to support the studio in its continued existence, on the other hand there are of course also some advantages (including studio time at a reduced rate)